Media Messages, part of the Media Group, are thrilled to announce the addition of Award Winning Audio Engineer, Dave Evans, to the rapidly expanding team.

Established in 2008 and based in Nerang on the Gold Coast, Media Messages is state-of-the-art, full service, audio production studio specialising in On Hold Messages, Instore Radio, TV and Radio commercials for their growing national clients. 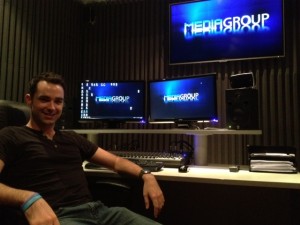 The appointment of Dave brings Media Messages team to a total of 14 which is an extraordinary growth in four short years.

Dave’s impressive career spans over eight years in the radio and recording industry and recently finished a five year stint with Southern Cross Austereo, the largest media company in the country, producing commercials and imaging for their stations.

He was twice nominated for an ACRA (Australian Commercial Radio Award) for his achievement in production , and worked on production for recording artists such as Pete Murray and Delta Goodrum.  A career highlight was producing the audio for the 2018 Commonwealth Games commercials which aided the bid team securing the Gold Coast as the location for the games.

Media Messages Director, Josh Loftus says he is looking forward to the skills and experience Dave’s addition will bring to the company.

“Working in the production industry means you get to know who the best people are and Media Messages prides itself on attracting the best. The end result is that our clients receive the highest level of quality and production for their audio needs.” Mr Loftus said.

“We are in the service industry, and we need to ensure that we not only need, but exceed out client’s expectations, so investment in quality staff is the key to our success,”  he adds.

Famous for their 30 Day Free Trial on all products, Messages look forward to discussing your business audio needs.