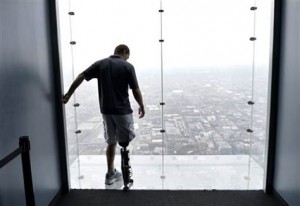 Zac Vawter’s bionic leg is controlled by a high tech system which links to his brain similar to the way a normal leg would. This means as he thought about climbing the 103 floors of one of the world’s tallest skyscrapers in Chicago, the motors, chains and belts in his prosthetic leg began to whir to life.

He finished the climb in 45 minutes, to the cheers of fans and researchers. The charity event “Skyrise Chicago” raises funds for the Rehabilitation Institute of Chicago, and was the new bionic technology’s first foray into the public eye.

This event shows a breakthrough for prosthetic technology, meaning amputees will no longer be left with clunky awkward pieces of plastic attached to their bodies, but instead have a working part of the body which can interact with the brain and work together with other parts of the body.

Media Messages applauds this advanced breakthrough, and the many hours of trial and error that is certain to have gone into the creation of the technology. We believe in keeping up with the latest technology, which is why our on hold messages and on hold music uses the latest digital technology to make sure your telephone on hold messages are professional and easy to install  and update.